<The phenomenal>  (explicate order, phenomena)
* use concepts, words and descriptions
* a thing (Buddha)
* phenomenological approach to reality
* classical science
* the notion of methods
* notions, ideas and words
* the conventional truth
* can stick of birth and death, being and non-being, you and I,
time and space as a separate entity
* can apply that kind of knowledge (separate entity) into
technology and into your daily life also
* make use of notions of birth and death, being and non-being
* The Four Noble Truths (conditioned dharma)
* the historical dimension

<The noumenal>  (implicate order, noumenon)
* can not use concepts, words and descriptions
* nature (Buddha nature)
* ontological approach to reality (in the realm of ontology)
* modern science (in the realm of quantum physics)
* have to leave behind notions, ideas and words
* should use a kind of language that is different
* the ultimate truth
* free from the notion of being and non-being, birth and death
* can see the father in the son
* try to find out what is the real sufferings of reality
* The Heart Sutra (unconditioned dharma: nirvana)
* the ultimate dimension

The above analysis is based on Thay's dharma talk on "The Science of the Buddha" in "The Ground of Right View" as follows:
http://tnhaudio.org/tag/four-kinds-of-nutriments/page/2/ 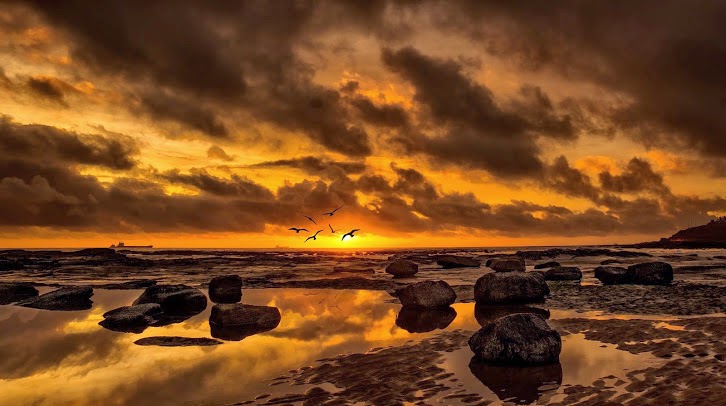 Dawn of Whitley Bay in the UK Photo by Ray Bilcliff
Posted by Hitoshi Tsuchiyama No comments: