A political science professor asked me what I think about when I meditate. I told him, "I don't think about anything." I said that I am only attentive to what is there, what is going on. He appeared skeptical, but it is the truth. While sitting, I make almost no use of my intellect. I don't try to analyze things or solve complex problems, like math problems or riddles. Even if I am examining a kung-an (Japanese: koan), I just allow it to be there and I contemplate it, without seeking to explain or interpret it, because I know that a kung-an is not a puzzle to solve. Examination, in the sense of awareness, does not mean analysis. It only means continuous recognition. Thinking requires strenuous mental work, and makes us tired. This is not the case while resting in awareness or "recognizing." We have a tendency to think that meditation demands a great mobilization of "gray matter," but that is really not the case. A meditator is not a thinker; a meditator does not do mental labor. On the contrary, meditation rests the mind.

Since our conversation began, I haven't once asked my friend to use his "gray matter." I have only invited him to "see," to "recognize" things with me. To do that, we must concentrate, but not analyze. We must be attentive, without speculation or
interpretation. Being attentive means giving only bare attention. It is a vehicle which can take you from sleep to awakening. If you do not know you are angry, feeling, thinking, sitting, and so forth, you are asleep. In his novel The Stranger, Albert Camus describes his anti-hero as a man who "lives as though dead." This is like living in a dark room with no light of awareness. When you light the lamp of awareness, you pass from sleep to awakening. The verb buddh in Sanskrit means "to wake up," and one who wakes up is called a Buddha. A Buddha is a person who is always awake. From time to time we have this awareness, so we are "from-time-to-time" Buddhas.

(Excerpts from "The Sun My Heart" written by Thich Nhat Hanh, p34 "From Sleep to Awakening")

(Thinking causes separations, discriminations, or the duality. That's why thinkers lose freedom. If we separate ourselves from others, afflictions such as fear, anger, despair, jealousy arise and we suffer. As David Bohm said, the way we see depends on the way we think. The object is the projection of our mind. So, we see illusions or delusions through mental projection based on our afflictions. In other words, we can't see the true nature of reality. That's why we must stop thinking when we meditate. And when we stop thinking, awareness revives and recognizes what is going on inside and around us, touching the true nature of reality. )

(Notes) The descriptions in the parenthesis are my commentaries. 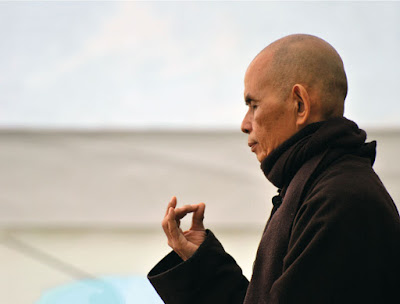