The Contemplation of the Mind in the Mind (2)


The followings are excerpts.

And that requires some skillfulness from the part (side) of practitioner. So, we organize an environment for us, for our friends, for our family to live so that the landscape of Mind Consciousness is always landscape of joy and happiness. And that is why we do not water the negative seeds. The good practice is to water the good seeds so that they have a chance to come up here (Mind Consciousness). And that is a practice called "Right Diligence".

The other day, we spoke of "The Noble Eightfold Path" but we did not have a chance to speak about "Right Diligence". "Right Diligence" is that. Not to water the negative seeds, not to give them a chance to manifest. When you read newspapers, when you watch television, when you have a conversation, these things may touch our anger, fear and sorrow and despair. So, we live in such a way, we organize our life in such a way that do not give these seeds, these negative seeds a chance to come up as a mental formation.

And then good things in us, we have to organize so that they have plenty of chances to come up here (Mind Consciousness). And that is true diligence. That is a good practice that can bring happiness very quickly to us and to our friends, to our family. So, the tenth exercise is to gladden the mind. That means to help the good seeds down here (Store Consciousness) to have plenty of chances to come up.

(My commentary)
Selective watering is "Right Diligence". If we can recognize each mental formation and each seed, we can select the seeds we should water to (touch). In order to know what is going on inside us, we need to be mindful. In other words, awareness must revive. So, the 1st and 2nd exercises are essential as the foundation for the further mindful actions. The key is to stop thinking.

Thay said, "Mindfulness, concentration and insight are three kinds of energies generated by the Yogis that have the power to liberate." I know Master Tempu Nakamura, a Japanese Yogi, introduced 「心身統一法」 (The method to unite the body and the mind) about 100 years ago in Japan after his Yoga training in India. And I feel that 「心身統一法」 is very similar to the Buddha's mindfulness. 「心身統一法」 and mindfulness may be the same thing. 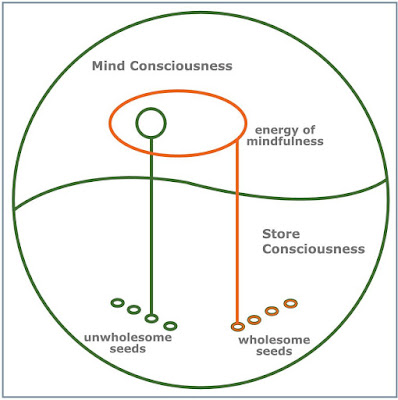 Consciousness and Mental Formations
Posted by Hitoshi Tsuchiyama No comments: