(The Great and Perfect Mirror)
In 1956, in a lecture on Mind and Matter at Trinity College in Cambridge, the physicist Erwin Schrodinger asked whether consciousness should be singular or plural. He concluded that from the outside, there seem to be many minds but that in reality there is only one. Schrodinger had been influenced by Vedanta philosophy. He was very interested in what he called "the arithmetical paradox" of mind. As we have seen, the separation of one and many is a measurement made by perception. As long as we are prisoners of that separation, we are prisoners of the arithmetical paradox. We can only be free when we see the interbeing and interpenetration of everything. Reality is neither one nor many.

The Vijftanavadins described "perfect unity of mind and object" as "a mirror in which all phenomena are reflected." Without phenomena, there can be no reflections, and without reflections, there can be no mirror. The image used to describe mind is "a large, round mirror which nothing can cover and nothing can hide." All phenomena are said to be stored in a "store-house" (alaya). The contents and the proprietor (subject of knowledge) in this store are one. In the teachings of the Vijftanavadins, alaya contains the seeds (bija) of all physical, physiological, and psychological phenomena. At the same time it functions as the ground from which the subjects and objects of knowledge arise. Alaya is not bounded by space or limited by time. In fact, even space and time arise from alaya.

Crucial to the Vijftanavada teaching is understanding the object of perception. They are of three types: pure objects or reality in itself (svabhava), representations or conceptualized visible objects (samanya-Iaksana), and pure images or conceptualized objects that remain in memory and may reappear in the mind when the correct conditions are present.

(Is Alaya One or Many?)
If we were to ask, "Does everyone have his or her own alaya, or do we all share a common alaya?," it would show that we have not yet realized the true nature of interbeing and interpenetration. We are still bewildered by what Schrodinger called the "arithmetical paradox." We may then ask, "If we do not each have separate alayas, why do we have separate, individual memories?"

Can we say that one child learns his lesson and another knows it by heart? Waves break on the water's surface, and although they cannot exist apart from the water, they have their own form and their own place. Many streams may flow into a river, but all of them are one with the river. On the surface of the sea of phenomena, we see many waves glistening, but for each wave to be formed, for each to be destroyed, it must be dependent on every other wave. The memories of each of us are not just our own personal treasures. They are living realities that are related to all other living realities. They undergo ceaseless transformation, as do our bodies. Each thing is reality, but reality is not subject to ideas of "one" or "many."
:Unquote 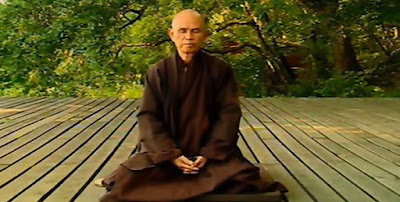