The followings are Thay's methods of contemplating suffering caused by ignorance.

(Suffering caused by the lack of wisdom)
Sit in the full or half lotus. Begin to follow your breath. Choose the situation of a person, family, or society which is suffering the most of any you know. This will be the object of your contemplation.

In the case of a person, try to see every suffering which that person is undergoing. Begin with the suffering of bodily form (sickness, poverty, physical pain) and then proceed to the suffering caused by feelings (internal conflicts, fear, hatred, jealousy, a tortured conscience). Consider next the suffering caused by perceptions (pessimism, dwelling on his problems with a dark and narrow viewpoint). See whether his mind functionings are motivated by fear, discouragement, despair, or hatred. See whether or not his consciousness is shut off because of his situation, because of his suffering, because of the people around him, his education, propaganda, or a lack of control of his own self. Meditate on all these sufferings until your heart fills with compassion like a well of fresh water, and you are able to see that the person suffers because of circumstances and ignorance. Resolve to help that person get out of his present situation through the most silent and unpretentious means possible.

In the case of a family, follow the same method. Go through all the sufferings of one person and then on to the next person until you have examined the sufferings of the entire family. See that their sufferings are your own. See that it is not possible to reproach even one person in that group. See that you must help them liberate themselves from their present situation by the most silent and unpretentious means possible.

In the case of a society, take the situation of a country suffering war or any other situation of injustice. Try to see that every person involved in the conflict is a victim. See that no person, including all those in warring parties or in what appear to be opposing sides, desires the suffering to continue. See that it is not only one or a few persons who are to blame for the situation. See that the situation is possible because of the clinging to ideologies and to an unjust world economic system which is upheld by every person through ignorance or through lack of resolve to change it. See that two sides in a conflict are not really opposing, but two aspects of the same reality. See that the most essential thing is life and that killing or oppressing one another will not solve anything.
Remember the Sutra's words:

Meditate until every reproach and hatred disappears, and compassion and love rise like a well of fresh water within you. Vow to work for awareness and reconciliation by the most silent and unpretentious means possible.
(Excerpted from Thich Nhat Hanh’s “The Miracle of Mindfulness”) 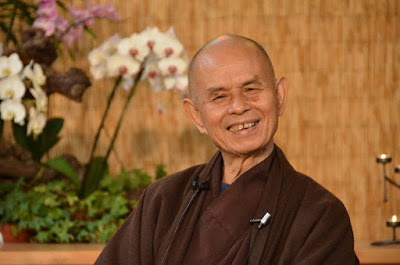