(The Tathagata Neither Arrives Nor Departs)
This non-conceptualizable reality, or true emptiness, is also called "suchness" (bhutatathata). Suchness, sometimes translated "thusness," means "it is so." It cannot be conceived or described through words and concepts but must be directly experienced. Suppose there is a tangerine on the table and someone asks you, "What does it taste like?" Rather than give an answer, you have to section the tangerine and invite the questioner to have a taste. Doing this, you allow him or her to enter the suchness of the tangerine without any verbal or conceptual description.

To remind his disciples of the unconditioned, beginningless and endless nature of reality, Buddha asked them to address him as the Tathagata. This is not an honorific title. Tathagata means "one who thus comes" or "one who thus goes." It means he arises from suchness, abides in suchness, and returns to suchness, to non-conceptualizable reality. Who or what does not arise from suchness? You and I, a caterpillar, a speck of dust all arise from suchness, all abide in suchness, and some day will return to suchness. Actually, the words "arise from," "abide in," and "return to" have no real meaning. One can never leave suchness.

Robert Oppenheimer, the physicist known as the father of the first atomic bomb, had a chance to read this section of the Anuradha Sutra. He understood it based on his observations of particles, which cannot be confined by concepts of space, time, being, or not-being. He wrote:

As you can see, the language of science has already begun to approach the language of Buddhism. After reading the above quote from the Anuradha Sutra, Oppenheimer said that until this century scientists would not have been able to understand the Buddha's replies of 2,500 years ago.
:Unquote 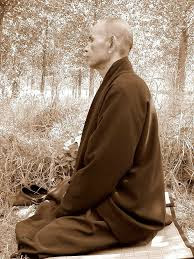