(The Net of Birth and Death Can be Torn Asunder)
There is another meditation which can be used in place of the one on true emptiness. It is called the meditation on the miraculousness of existence. "Existence" means being in the present. "The miraculousness of existence" means to be aware that the universe is contained in each thing, and that the universe could not exist if it did not contain each thing. This awareness of interconnectedness, interpenetration, and interbeing makes it impossible for us to say something "is" or "is not," so we call it "miraculous existence."

Even though Oppenheimer replied "No" four times to the questions about the nature of electrons, he did not mean that electrons are nonexistent. Even though the Buddha said, "You cannot find the Tathagata even in this life," he did not mean that the Tathagata is nonexistent. The Great Prajna Paramita Sutra uses the word "not-empty" (asunya) to describe this state. "Not-empty" is the same as "the miraculousness of existence." "True emptiness" and "the miraculousness of existence" can keep us from falling into the trap of discriminating between being and non-being.

Both electrons and Tathagata are beyond the concepts of being and non-being. The nature of true emptiness and the miraculousness of existence of the electrons and the Tathagata save us from the traps of being and non-being and lead us
directly into the world of non-conceptualization. How can we practice the meditation on the miraculousness of existence? Anyone who understands the theory of relativity knows that space is intimately connected with both time and matter. For such persons, space has a larger meaning than for persons who still believe that space exists independently of time and matter. When we look at a bee, we may like to see it first through the eyes of a physicist who understands relativity, and then go even beyond that to see true emptiness and the miraculousness of existence in it. If you attempt to do this regularly, with your whole being, I am sure that it will free you from entanglement in the net of birth and death. In Zen circles, the problem of birth and death has always been regarded as the most urgent. Zen Master Hakuin calligraphed the character for Death quite large and then added in smaller strokes: "Anyone who sees to the depths of this word is a true hero."
:Unquote 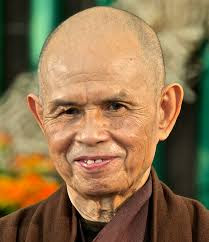