The followings are the First and the Second of Forty Tenets of Plum Village.

(First of Forty Tenets of Plum Village)
"Space is not an unconditioned dharma. It manifests together with time, matter and consciousness."

In the Heart Sutra, the ultimate truth in the phenomenal world (historical dimension) is described from the beginning of "観自在菩薩 (Avalokiteshvara)" till "不増不減 (no increasing and no decreasing)". And its logic is the following.
"A is made of non-A elements.
So, A is not A.
A is everything except for A.
So, A is no other than B.
Namely, A is B."

That's why "Interdependent co-arising" enables us to transcend separations, discrimination, or the duality. We can stop separating ourselves from others through this non-duality. So, there is no space for any afflictions to arise. Therefore, we can liberate ourselves from sufferings.

David Bohm explained more simply; "Everything is internally related to everything. Everything contains everything." The Buddha and David Bohm said the same thing. In this sense, Buddhism and quantum physics are very similar. All phenomena are conditioned because there are only relative truths in this phenomenal world, as Albert Einstein scientifically proved it by the general theory of relativity. 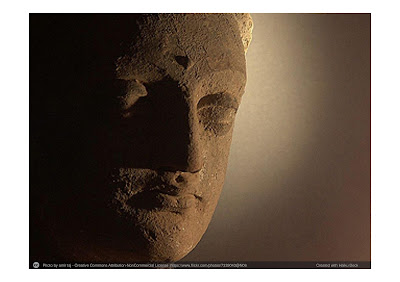 The Buddha
Posted by Hitoshi Tsuchiyama No comments: